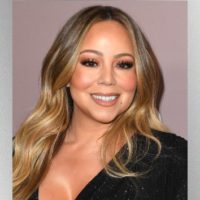 Steve Granitz/WireImageMariah Carey will be honored for something other than her singing this spring.

Variety reports that Mariah will receive a special achievement award from the African-American Film Critics Association during its 12th annual AAFCA Awards in April.  Specifically, she’ll receive the Innovator Award, in recognition of the lead role she’s played in the creative vision of her music videos and her various specials: She’s co-directed many of her videos, including “Always Be My Baby.”

In addition, Mariah has “presented opportunities behind the camera for a lot of Black technicians and creatives,” according to AAFCA CEO and President Gil Robertson.

“When members spoke about the impact of her videos and how much they meant to them, we thought ‘Let’s recognize her because she’s always projected a lot of positive energy, which we definitely need now during the pandemic and coming out of the last four years,’” Robertson told Variety of honoring Mariah.

Other honorees this year include Ma Rainey’s Black Bottom director George C. Wolfe, who’ll receive the Salute to Excellence Award, and Stacey Abrams, whose 2020 documentary about voter suppression, All In: The Fight for Democracy, will receive the Stanley Kramer Award for Social Justice.

The AAFCA Awards will be held April 7.