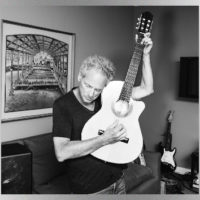 Credit: Cara RobbinsThis past November, Stevie Nicks sold an 80% interest in her catalog of songs to music publisher Primary Wave.  Now comes word that her former Fleetwood Mac band mate and ex-romantic partner, Lindsey Buckingham, has sold 100% of his music-publishing rights to the Hipgnosis Songs company.

Variety reports that, according to an announcement, Hipgnosis initially purchased a 25% stake in Buckingham’s song catalog in September before recently acquiring the remaining 75%. The company also has a 50% share of any unreleased compositions by Lindsey.

A message from Hipgnosis Songs founder Merck Mercuriadis celebrating the deal with Buckingham posted on the company’s Facebook page.

“He is one of the greatest guitarists, songwriters and producers of all time, yet he is still so underrated,” Mercuriadis says of the Rock & Roll Hall of Famer. “His work with Fleetwood Mac has brought the world unparalleled joy over the last 45 years, and he belongs in any discussion featuring Brian Wilson and Paul McCartney. It’s wonderful to welcome him and his iconic songs both as a solo artist and with Fleetwood Mac to the Hipgnosis family.”

In his own statement, Buckingham says, “Prior to arriving at an agreement with Hipgnosis, I had wonderful long conversations with Merck Mercuriadis. I was pleased to find a kindred spirit, someone who’s a big fan of my work in Fleetwood Mac, and an even bigger fan of my solo efforts. I look forward to working with Merck and the whole Hipgnosis team going into the future.”

Buckingham’s catalog comprises 161 songs, including Fleetwood Mac classics like “Go Your Own Way,” “Tusk” and “Big Love,” the solo hits “Trouble” and “Go Insane,” and songs he wrote for collaborative albums he released with Nicks in 1973 and Fleetwood Mac’s Christine McVie in 2017.