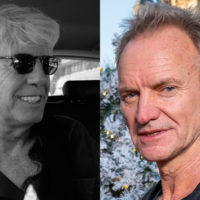 The benefit is being put on The David Lynch Foundation, which Twin Peaks director David Lynch established to promote the healthful benefits of meditating. The virtual event is designed to raise money to bring free Transcendental Meditation training to adults and kids, including healthcare workers on the COVID-19 front lines, veterans with PTSD and depression, and families at risk.

During the fundraiser, Nash will sing his classic Crosby, Stills & Nash ballad “Our House,” Sting will duet with acclaimed Beninese artist Angélique Kidjo on a version of The Police‘s “One World (Not Three)”, and Costello will sing “What’s So Funny About Peace Love and Understanding.”

The Meditate America event also will feature pop superstar Katy Perry being interviewed by actor Hugh Jackman about her meditation practice and motherhood, and Kesha performing a cover of Bob Dylan‘s “I Shall Be Released.”

You can request free tickets to view the show at MeditateAmerica.org.