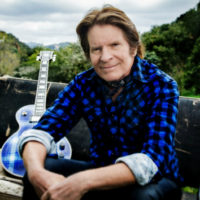 In a message posted on his Twitter feed, Fogerty writes, “I object to the President using my song, ‘Fortunate Son’ in any way for his campaign. He is using my words and my voice to portray a message that I do not endorse…Therefore, I am issuing a ‘cease and desist’ order.”

The 75-year-old Rock & Roll Hall of Famer goes on to explain, “I wrote this song because, as a veteran, I was disgusted that some people were allowed to be excluded from serving our country because they had access to political and financial privilege. I also wrote about wealthy people not paying their fair share of taxes. Mr. Trump is a prime example of both of these issues. The fact that Mr. Trump also fans the flames of hatred, racism and fear while rewriting recent history, is even more reason to be troubled by his use of my song.”

Accompanying the message is a photo of a young Fogerty wearing a uniform taken while he served in the military during the 1960s.

John’s “cease-and-desist” order to the President comes after he posted a video message on his Facebook page last month in which he expressed his annoyance that Trump had played “Fortunate Son” at a recent campaign rally.