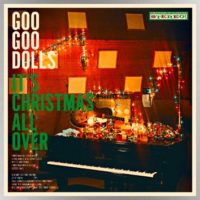 Warner RecordsGoo Goo Dolls have released the track listing for their first holiday album, It’s Christmas All Over, and it features an eclectic lineup of holiday classics, rarities, originals, and even a cover of one of their own hits.

The two original songs on the record are “This Is Christmas — the first single, due out October 2 — and “You Ain’t Gettin’ Nothin’.” There are also covers of “Hark! The Herald Angels Sing,” “Let It Snow,” Have Yourself a Merry Little Christmas” and “Christmas Don’t Be Late,” better known as “The Chipmunk Song.”

Among the more obscure holiday tunes on the album is “Christmas All Over Again,” released in 1992 by Tom Petty & The Heartbreakers. It appeared on both the soundtrack of Home Alone 2: Lost in New York and A Very Special Christmas 2.

There’s also Louis Prima‘s “Shake Hands with Santa Claus,” which dates back to 1951, and a song called “The Christmas Party,” which may be a cover of a 2004 song by the indie-rock band The Walkmen.

Finally, there’s a new version of “Better Days,” which is described as a “reimagining” of the Goo Goo Dolls’ 2005 hit. Though not explicitly a Christmas song, it does make reference to “boxes wrapped in strings” and “the one poor child who saved this world.”

“It’s just something different for us,” front man John Rzeznkik told ABC Audio about the project a few months ago. “And I had a great time doing it. And I’d like to share it with people and if someone’s gonna criticize me for it, it will fall on deaf ears!”

It’s Christmas All Over is out October 30. Here’s the full track listing:

“Christmas All Over Again”
“Shake Hands With Santa Claus”
“This Is Christmas”
“Christmas Don’t Be Late”
“Better Days”
“You Ain’t Getting Nothin'”
“Let It Snow”
“Have Yourself a Merry Little Christmas”
“Hark! The Herald Angels Sing”
“The Christmas Party” — featuring The Union Square 5