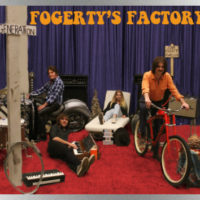 Credit: Bob FogertyWhile self-quarantining at home with his family, John Fogerty got together with his sons Shane and Tyler and his daughter Kelsy to recreate the cover photo of the classic 1970 Creedence Clearwater Revival album Cosmo’s Factory.

Cosmo’s Factory, which was released 50 years ago this July, was CCR’s most successful studio album, spending nine consecutive weeks at #1 on the Billboard 200 and selling more than four million copies in the U.S. It yielded three two-sided top-five singles: “Travelin’ Band” backed with “Who’ll Stop the Rain,” “Up Around the Bend” backed with “Run Through the Jungle,” and “Lookin’ Out My Back Door” backed with “Long as I Can See the Light.”

Meanwhile, Fogerty also teamed up with Shane, Tyler and Kelsy to perform Creedence’s classic 1969 hit “Down on the Corner” in his home studio. You can check out a video of the performance at John’s official YouTube channel. It’s the first in a planned series of clips of John and his Family Band playing CCR tunes that will be posted on YouTube.

“Bringing a little light from our home to yours. We are having a little family fun together during the pandemic,” Fogerty says. “It’s such a great feeling to be making and playin’ music surrounded by love. We all need to celebrate the life we have and remember how precious it is.”

He adds, “I love music, I am listening every day. Makes everything feel better for me. Put the records on, pull out the old guitar, turn the radio up…and dance to the music!”