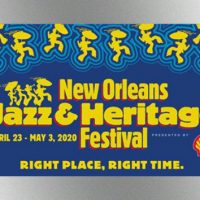 The lineup for the 2020 New Orleans Jazz & Heritage Festival has been unveiled and, as expected, The Who is among the artists set to headline this year’s extravaganza, which takes place April 23 to April 26 and April 30 to May 3.

The British rock legends will hit the festival’s main stage on Saturday, April 25. Back in September, Who guitarist Pete Townshend posted a video on his Instagram page in which he mentioned that his band would play the New Orleans Jazz Fest this year.

Stevie Nicks, Lionel Richie, The Beach Boys, Dead & Company, Lenny Kravitz and The Black Crowes are among the event’s other headliners.