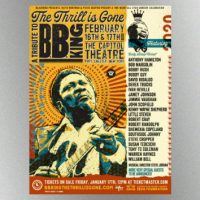 The lineups for the two shows will vary, and the specific musicians that will be appearing at each event will be revealed on Tuesday, January 28.  Acclaimed drummer and producer Steve Jordan will serve as the concerts’ musical director. More guests will be added to lineup soon.

The events are being co-produced by longtime B.B. King drummer Tony TC Coleman, who also will perform at the shows.  “It’s a thrill to be involved in this once-in-a-lifetime event celebrating my good friend B.B. King,” Coleman says. “To get to see these amazing musicians performing hits from the King of Blues is a dream come true.”

Part of the proceeds raised will benefit the Seva Foundation, a charity co-founded by Wavy Gravy that focuses on the prevention and treatment of blindness and other visual impairments.

Visit BBKingTheThrillIsGone.com to check out the full confirmed lineup and find out more details about the shows.