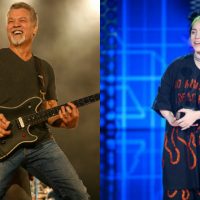 Van Halen is trending on Twitter today, but it’s not because the band has announced any tours or new music. No, it’s because teenage pop superstar Billie Eilish doesn’t know who they are.

During an interview on ABC’s Jimmy Kimmel Live! two weeks ago, host Jimmy Kimmel tested the 17-year-old phenom’s knowledge of older pop culture. At one point, he asks Eilish, “Can you name a Van Halen?” “Who?” she responded.

The clip then resurfaced online when someone tweeted, “Billie Eilish didn’t know who Van Halen was, I’m sobbing.” While some people were shocked and appalled by this idea, another user then quote-retweeted the original tweet, and added, “Wow 17 year old girl doesn’t know of a band [whose] peak was nearly 40 years ago, that’s crazy aha.” As of Monday afternoon, that tweet has been retweeted over 32,000 times.

Meanwhile, 2019 has seen Eilish score a chart-topping debut album with When We All Fall Asleep, Where Do We Go? and a #1 hit on the Billboard Hot 100 with “Bad Guy.”

It seems that the only way this can end is if Kimmel brings back his “MashUp Monday” segment and invites Van Halen Eilish and to perform “Runnin’ with the Bad Guy.”