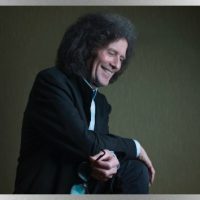 Credit: Andy FallonThis past July, 1970s British pop star Gilbert O’Sullivan played his first two concerts in the U.S. in 43 years — one in New York City and the other in Philadelphia. Now O’Sullivan is set to return to the States this April for a longer series of shows.

The singer-songwriter, who turned 73 on Sunday, will play nine concerts in various major cities across the country, starting with an April 12 performance in Washington, D.C., and plotted out through an April 26 show in Los Angeles. The trek also will include return visits to New York and Philadelphia, as well as stops in Boston, Chicago, Nashville, Atlanta and Berkeley, California.

All of the concerts with the exception of the L.A. and Berkeley shows, will take place at City Winery franchises. Gilbert will play as a duo with guitarist Bill Shanley, who frequently collaborates with The Kinks‘ Ray Davies.

Gilbert’s latest album is a self-titled effort that was released in 2018. The record was produced by Ethan Johns, whose also has worked with Paul McCartney, Tom Jones, Crowded House, Kings of Leon and many others.