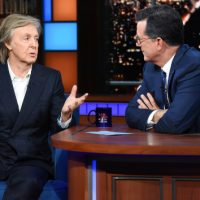 Scott Kowalchyk/CBS(NEW YORK) — Steven Colbert aired the second part of his interview with Paul McCartney on Thursday’s edition of CBS’ The Late Show, which featured the legendary Beatle reminiscing about his days with the fab four, and how being knighted by Queen Elizabeth II in 1997 made him feel like Harry Potter.

In the segment, taped during McCartney’s September 24 appearance on The Late Show, McCartney described going from Beatle Paul to Sir Paul.

“You’ve got a little red cushion…So you kneel down on the cushion, and then she takes the sword and [places it on] either side of your shoulder, and then says, ‘Arise, Sir Paul,'” he recalled.

“So you were an ordinary guy, and then she does that [tapping each of his shoulders], you’re just magically Sir Paul,” he said, adding, “It’s just like Harry Potter.”

McCartney also described playing to packed stadiums full of screaming fans, which was fun at the beginning, but soon grew old.

“After a while, we just started thinking, ‘We’re musicians, we can’t hear ourselves,’ so it got a little bit wearing after a while.”

Explaining how they managed to conquer America when other British acts failed, Paul reasoned, “Some of the guys were trying to be like Elvis [Presley], and you had Elvis…So we knew we had to be different, and we were.”

McCartney went on to explain that The Beatles created their sound by combining various aspects of their favorite artists, without sounding like them.