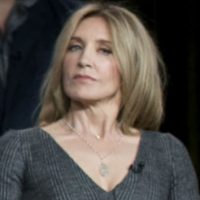 ABC/Image Group LA(BOSTON) — Dozens of friends and family members have lobbied the judge who holds the fate of Felicity Huffman in her hands, in hopes she’ll show leniency to the former Desperate Housewives star, who was indicted as part of the Varsity Blues college cheating scandal.

In his, Cherry reportedly relayed a story about Huffman’s caring treatment of an elderly co-star, saying Huffman demonstrated, “a master class on human compassion” in dealing with the woman, who was having trouble remembering her lines.

Longoria apparently wrote her own note, remarking on Huffman’s kindness and support in dealing with a co-star who was bullying Longoria.

It had already been revealed that Huffman’s husband William H. Macy, who was not charged in the cheating scandal, was also among the 27 people who wrote the judge on her behalf.

The actress, who was arrested in March, pleaded guilty on May 13 to charges of conspiracy to commit mail fraud and honest services fraud, and she expressed “deep regret and shame” for attempting to illegally boost the test scores of Sophia, her eldest daughter.

Her supporters hope she’ll receive, at maximum, the government’s recommended sentence of a month behind bars, plus probation, and a $20,000 fine.