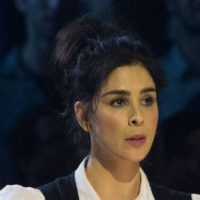 Mark Davis/Comedy Central(LOS ANGELES) —  When The Sarah Silverman Show was on Comedy Central back in 2007, the comedienne appeared in an infamous sketch in which she appeared in blackface — and she’s just revealed that it’s still costing her.

During an interview on The Bill Simmons Podcast, Silverman explained, “I recently was going to do a movie, a sweet part. Then, at 11pm the night before, they fired me because they saw a picture of me in blackface from that episode.”

Silverman declined to explain which movie it was, but she revealed, “They hired someone else who is wonderful but who has never stuck their neck out. It was so disheartening.”

She tells Simmons of the firing, “It just made me real, real sad, because I really kind of devoted my life to making it right.”

Then, as others who make their living being outspoken have done, Silverman slammed so-called “cancel culture.”

“It’s like, if you’re not on board, if you say the wrong thing, if you had a tweet once, everyone is, like, throwing the first stone…It’s so odd. It’s a perversion,” she continued. “It’s really, ‘Look how righteous I am and now I’m going to press refresh all day long to see how many likes I get in my righteousness.'”

In 2015, she called the blackface sketch her most “regrettable joke,” but blamed the outrage about it today on a lack of context.

“I tweeted it when Twitter was new and the people who followed me watched that show and it was from that show,” she told The Wrap. “…Now it’s forever there and it looks…totally racist out of context and I regret that.”