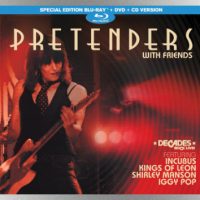 In August 2006, The Pretenders teamed up with several guest artists at a concert in Atlantic City, New Jersey, that was filmed for an episode of the VH1 series Decades Rock Live! Now, a newly remixed and remastered version of the show titled The Pretenders with Friends gets its release today as a Blu-Ray/DVD/CD package.

Chrissie Hynde and her band played a set packed with many of their classic songs, and also were joined for a series of duets by Iggy Pop, Garbage frontwoman Shirley Manson and popular alt-rock acts Kings of Leon and Incubus.

Minus their guests, The Pretenders played hits including “Back on the Chain Gang,” “Day After Day,” “Precious,” “Mystery Achievement” and “Brass in Pocket.” To close out the concert, the band was joined by the entire cast of guest artists for a rock rendition of “Middle of the Road.”

The Pretenders with Friends also boasts some bonus features, including interviews with the various performers, a slide show, trailers and more.

Here’s the full set list of The Pretenders with Friends: