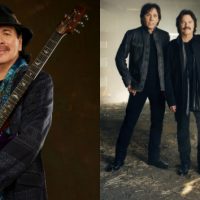 Santana guitarist and band leader Carlos Santana tells ABC Radio that he’d invited some of the group’s early members to take part in the tour, but only one was available.

“[E]verybody was already booked,” he explains. “[Original singer/keyboardist] Gregg Rolie is touring with Ringo [Starr]…[guitarist] Neal Schon is touring with Journey, and [founding drummer] Michael Shrieve is doing his own thing. “So the only person who’s coming with me is [original Santana percussionist] Michael Carabello.”

Asked if Matchbox Twenty singer Rob Thomas, who sang the smash chart-topping single “Smooth” from Supernatural, might make a guest appearance during the tour, Carlos says, “That’s a good idea. He’s already booked doing his thing, but I think we’re around here in the L.A. area [when he is], so we might do something together.”

Doobie Brothers singer/guitarist Tom Johnston tells ABC Radio that he and his band mates have known Santana for almost their entire careers, and had the chance to tour together Down Under in 2017.

“We had a really good time,” Johnston says of the trek.

As for whether The Doobie Brothers and Santana might jam together during the outing, Tom says he isn’t sure.

“It’s entirely possible,” he notes. “I know he does that on occasion. There was some talk of it…I think once we get out and start doing the tour, we’ll figure that out.”

The North American Supernatural Now joint tour is mapped out through an August 25 concert in Wantagh, New York.  Here’s the trek’s full itinerary: