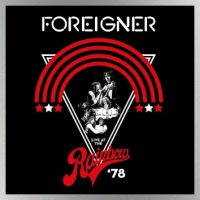 RhinoThis past March, Foreigner released a concert video featuring an April 1978 performance that the band gave at London’s Rainbow Theatre.  Now the veteran rockers will issue a companion album on CD and as a two-LP vinyl set on July 12.

The Live at The Rainbow ’78 album features the same 12 songs that appear on the previously released DVD, Blu-ray and digital video and audio versions. The original audio has been remixed and remastered for the release.

Foreigner’s set at the concert featured renditions of all 10 tunes from the band’s self-titled 1977 debut album, including the hits “Feels Like the First Time,” “Cold as Ice” and “Long, Long Way from Home.” The group also played two future classics from their then-forthcoming sophomore record, Double Vision — the title track and “Hot Blooded.”

Here’s the track list of the Live at The Rainbow ’78 CD:

“Long, Long Way from Home”
“I Need You”
“Woman Oh Woman”
“Hot Blooded”
“The Damage Is Done”
“Cold as Ice”
“Starrider”
“Double Vision”
“Feels Like the First Time”
“Fool for You Anyway”
“At War with the World”
“Headknocker”