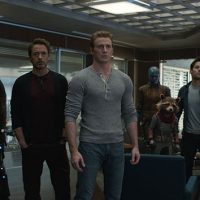 Marvel Studios/Disney(LOS ANGELES) — Avengers: Endgame, the 22nd and latest in the Marvel superhero franchise, promises to tie up all of the loose ends and answer all of the questions raised in all of the previous 21 films over 11 years.

As you might suspect, that’s gonna take some time to do — three hours and one minute, to be exact.  That’s a long time to sit in one place, no matter how good the movie is, but Marvel Studios President Kevin Feige tells ABC Radio it’s not unprecedented.

And one more thing, warns executive producer Trinh Tran: don’t even think of leaving your seat once the movie’s started.

“I would say that there is not one single scene that you should miss from this movie, so please do not go to the restroom, don’t go buy popcorn,” Tran warns, “’cause you don’t wanna to come back and go, ‘What did I miss?’ and ‘How was that connected to everything else?'”