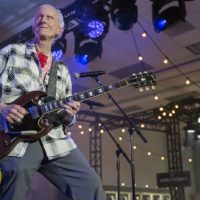 Daniel Knighton/Getty ImagesDoors guitarist Robby Krieger has written and recorded a new song called “Music Speaks Louder Than Words,” which will appear in an upcoming documentary about Prince titled Mr. Nelson: On the North Side. The film will focus on the late music legend’s early life growing up on the north side of Minneapolis.

According to a post on his official Facebook page, Krieger recorded the tune at his Horse Latitudes studio in the Los Angeles area, with Grammy-winning soul/R&B singer Macy Gray contributing lead vocals.

“Prince was an amazing artist, but he was also such an underrated guitarist,” says Robby.

Mr. Nelson: On the North Side will feature a variety of well-known artists sharing their recollections of Prince and discussing their appreciation of his artistry.

The 90-minute flick was directed by Kirk Fera, and is expected to premiere later this year.

In other news, Krieger has added a September 14 concert at the Bergen Performing Arts Center in Englewood, New Jersey, to his 2019 tour schedule. The show also will feature Mountain frontman Leslie West. Tickets go on sale this Friday, April 26, at 11 a.m. ET.