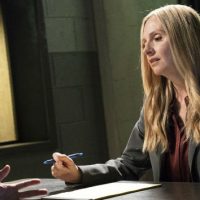 ABC/Mitch Haaseth(NEW YORK) — For the People kicked off its second season last week on ABC and it’s already tackling some heavy real-world issues. In tonight’s episode, the legal drama is taking on immigration and family separation.

An undocumented immigrant is asked to testify in a federal case and when he’s done testifying, ICE agents are waiting to take him away and deport him.

Hope Davis, who plays public defender Jill Carlan in the series, explains to ABC Radio that this is something happening in the real world “as we speak.”

“In this case, a man has come to testify and the ICE agents are unaware that around the corner his young son is sitting on a bench outside the courtroom and he’s waiting and waiting for his father to come and get him — and his father doesn’t come,” she says.

The lawyers must then band together in an attempt to reunite father and son.

As for what else is coming up this season, Davis teases that it’ll be a mix of ripped-from-the-headlines drama, original court cases and the characters’ personal lives.

This being a Shonda Rhimes show, you can expect it to be juicy. But Davis says Shondaland shows aren’t just fun to watch, they’re fun to work on as well.

“[Shondaland] is a place where everybody is respected and taken care of and heard and you’re safe there and it’s like, every workplace should be like that,” Davis says.