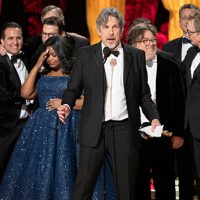 Despite months of controversy, on Sunday night, the 91st Annual Academy Awards managed to pull off a faster-moving telecast that clocked in at just about 3 hours and 15 minutes — and not having a host was a big part of it.  Without a lengthy monologue, humorous bits or audience stunts, the show simply gave us what we really tune into the Oscars for: big, big stars and awards, as well as a few surprises.

Big Surprises
As for those awards, jaws dropped as Green Book.  Based on the true story of African-American pianist Dr. Don Shirley, who hired an Italian-American bouncer to chauffeur him on a tour of the segregated American South in the 1960s, the film took home the Best Picture award, beating the heavily favored Roma.

Many thought the controversy surrounding Green Book would have hurt its chances: The co-writer once sent a racist tweet, director Peter Farrelly admitted to raunchy on-set behavior in the past, and the family of Dr. Shirley slammed the movie as inaccurate.

In another shocker, favorite to win Glenn Close lost the Best Actress trophy to Olivia Colman, for the latter’s daffy turn as Britain’s Queen Anne in The Favourite.  While Colman’s performance was praised, nobody thought she had a chance against Close and her Golden Globe-winning performance in The Wife.

“Glenn Close, you’ve been my idol for so long and this is not how I wanted it to be. And I think you’re amazing and I love you very much !” said Colman in her hilarious, endearing acceptance speech.  She also said she hoped her kids were watching, noting, “This is NOT going to happen again!”

Recalling how she’d dream of winning the Oscar during her time working as a maid, Colman said, “To any little girl who’s practicing her [acceptance] speech…you never know!”

Noting that he’s the first-generation son of Egyptian immigrants, Malek said, “Look, we made a film about a gay man and an immigrant who was unapologetically himself. [It’s] proof we’re longing for stories like this. Part of my story is being written right now, and I could not be more grateful.”

An Oscar-Winning Singer Is Born
Lady Gaga took home her first Oscar for co-writing “Shallow,” while her tender onstage duet with her A Star Is Born director and co-star Bradley Cooper was one of the show’s highlights.

History-Making Moments
In one of several history-making moments, Queen, with current frontman Adam Lambert, became the first rock band ever to open the Academy Awards, performing “We Will Rock You” and “We Are the Champions.”

Meanwhile, Ruth E. Carter and Hannah Beachler [beekler] became the first African-American women ever to win, respectively, Best Costume Design and Best Production Design, both for Black Panther.   They were also only the second and third black women ever to win non-acting Oscars.

Peter Ramsey became the first African-American to be nominated, and then win, for Best Animated Feature; he co-directed Spider-Man: Into the Spider-Verse.

And director Spike Lee won his first-ever Oscar: Best Adapted Screenplay, for BlacKkKlansman. In his speech, Lee noted that it’d been 400 years “since our ancestors were stolen from Mother Africa and…enslaved,” and paid tribute to his grandmother, the daughter of a slave, who graduated college and then put him through college.  Then Spike got even more political.

“The 2020 presidential election is around the corner!” he exclaimed. “Let’s all mobilize. Let’s all be on the right side of history. Make the moral choice between love versus hate. Let’s do the right thing!”