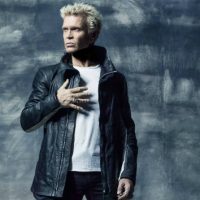 Billy Idol and his longtime guitarist, Steve Stevens, will hit the road as a duo next month for the first time ever for a North American tour that’s been dubbed “Turned On, Tuned In and Unplugged.” The acoustic trek kicks off March 3 in Vancouver, Canada, and is mapped out through an April 4 concert in Red Bank, New Jersey.

In addition to performances of the pop-punk legends’ classic hits, including “Rebel Yell,” “White Wedding,” “Dancing with Myself,” “Eyes Without a Face” and “Flesh for Fantasy,” the shows will feature Idol telling stories behind the songs and about highlights from his eventful career.

The trek will include a trio of two-night engagements in San Francisco, Los Angeles and New York City.

Billy has given fans a taste of what the shows will be like by posting a video on his YouTube channel of him and Steve playing “To Be a Lover” unplugged at a September 2018 concert at Third Man Records in Nashville.

In other news, Idol recently lined up his first-ever Mexican concerts, which are set to take place on October 17 in Mexico City and October 20 in Monterrey.

Billy’s 2019 tour schedule also includes a performance at Canada’s Roxodus Music Fest, running from July 11 to July 13 in Edenvale, Ontario, and a previously announced five-show Las Vegas residency this October at the Pearl Theater at the Palms Casino Resort.

Here are all of Idol’s confirmed 2019 concerts:

* = duo show with Steve Stevens
+ = specific date not announced yet.