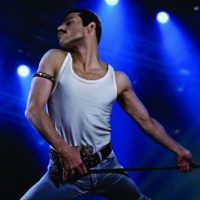 The Irish actor, who played the conniving Petyr [Peter] “Littlefinger” Baelish [BAY-lish] on the show up until his demise last season, is thriving on both the big and small screen.

He plays Queen’s manager John Reid in the film Bohemian Rhapsody, opposite Rami Malek as Queen frontman Freddie Mercury. Both the film and Malek are up for Golden Globes this Sunday.

“I am very happy about it and for Rami Malek,” Gillen tells ABC Radio of the nominations. “I think that the film is really about the songs of Queen and Rami’s performance, and both of those are tremendous.”

He adds, “Nice for me to be part of it, it’s a supporting role. I’m part of the story but it’s really about him and the band and the songs and Freddie — Freddie’s legacy. So I’m really pleased that so many people have gone to see it.”

The Golden Globes air live on NBC Sunday at 8 p.m. ET. Gillen won’t be attending the ceremony because he’ll be working in the U.K., but you can catch his return to the small screen in History’s new sci-fi series, Project Blue Book.

The series, based on true events of government investigations into UFO sightings in the 1950s and 60s, debuts Tuesday, January 8 at 10 p.m. ET.