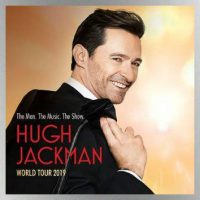 AEG Presents/TEG-Dainty/Robert Fox(NEW YORK ) — Tickets go on sale Friday for Hugh Jackman’s first-ever world tour, which will include plenty of singing, dancing and storytelling, but not his most famous on-screen character. However, there’s a possibility that another Marvel superhero may show up.

“There won’t be a Wolverine kick line,” Jackman jokes. But, he reveals, “I actually am about to call Ryan Reynolds, because I do think it would be quite cool if Ryan made an appearance somewhere along…as Deadpool! I think that could be kinda cool!”

If Reynolds shows, that’ll be just one of many surprise guests Jackman hopes will join him during the tour — he’s planning on asking everyone from Sting to James Corden to Kristin Chenoweth to drop by. It’s all part of his plan to make every concert unique and special.

“There’s something sacred to me about [performing] live and I want people to feel when they come that something happened that night that ONLY happened that night,” he explains. “It’s like a little secret that we have. Something between the 13,000 of us, that you can only experience tonight.”

One guest who’ll definitely be joining Jackman for multiple shows is Keala Settle, who played the Bearded Lady in the hit movie The Greatest Showman. Jackman says thanks to that movie and its soundtrack, his audiences on this tour will likely include a whole new demographic: little kids.

“There’ll be no swearing,” he laughs. “I can tell you that!