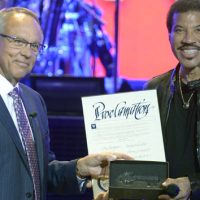 Image credit: Bryan Steffy Lionel Richie, who’s been playing a residency at Zappos Theater at Planet Hollywood Resort & Casino in Las Vegas, was presented with a key to the legendary Las Vegas strip on Tuesday.

Richie’s final residency dates at Zappos Theater at Planet Hollywood Resort & Casino will kick off on Wednesday and run through October 20.  And of course, you can see him when he returns as a judge on the upcoming new season of American Idol on ABC.