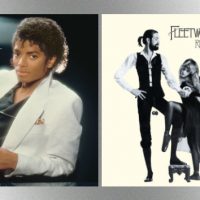 MJJ Productions Inc.; Warner Bros. RecordsNielsen Music’s Mid-Year Report is here, tallying the best-selling music releases for the first half of 2018. While various contemporary pop and hip-hop acts dominate most of the tallies, some older acts’ catalog releases have made a significant impact on one particular category: the top-selling vinyl albums.

Prince and the Revolution‘s soundtrack to the 1984 film Purple Rain is in eighth place, and rounding out the top 10 is The Beatles‘ landmark 1967 album, Sgt. Pepper’s Lonely Hearts Club Band.

It’s also worth mentioning that the 2014 soundtrack album Guardians of the Galaxy: Awesome Mix Vol. 1, which is packed with hits and gems by various 1970s artists, is #3 on the list.

The best-selling vinyl album for the first half of 2018 is a new release, ex-White Stripes frontman Jack Black‘s latest studio effort, Boarding House Reach, which has sold 37,000 copies.

Here is the full mid-year list of the top-10 best-selling vinyl albums: