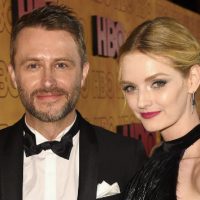 Photo by FilmMagic/FilmMagic(LOS ANGELES) — Lydia Hearst, the wife of Nerdist founder and AMC show host Chris Hardwick, has broken her silence to People, following allegations made by his ex-girlfriend Chloe Dykstra that he had emotionally and sexually abused her during their three-year relationship.

Hearst declared, in part, “This is not a statement in defense, this is a statement of defense. Defense for all the women who have been sexually abused, raped, trafficked, and tortured; defense of all the people who this movement was started for…As someone who has been involved in toxic relationships in the past, I…do not take this situation lightly.”

She added, “I have made the decision to come out in support of my husband, not out of obligation, but out of necessity to speak the truth about the person I know. Chris is nothing but loving and compassionate and is the only person who has stood by me, never judged me, helped me heal, and feel whole.”

“To defend my husband would be giving credence to any of these accusations,” she continued. “I will not do that. Chris Hardwick is a good man. I remain in complete support of my husband, and I believe that the truth will always win…”

Last week, Dykstra claimed that she was in a relationship with an ex who was controlling and sexually abusive. She didn’t name the popular show host, but it was easy to work out to whom she was referring.

In response, AMC pulled Hardwick’s show Talking with Chris Hardwick, and he was fired from moderating two panels at San Diego’s Comic-Con in July.

A “heartbroken” Hardwick vehemently denied the accusations, and clarified that he left Dykstra after she had cheated on him; texts later surfaced that seemed to show that she was eager to reconcile with him.