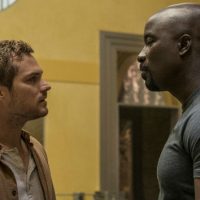 David Lee/Netflix(NEW YORK) — Netflix unveils the second season of Luke Cage Friday, and with it, says showrunner Cheo Hodari Coker, will come a collaboration that fans first saw in the pages of Marvel Comics in 1972: Luke Cage teaming up with the mystical martial artist Iron Fist.

While 2016’s debut season of Luke Cage, and Mike Colter’s portrayal of the Harlem hero, found favor with fans, reaction was less than enthusiastic about Finn Jones’ portrayal of Danny Rand/Iron Fist in his standalone series last year.  While the two heroes fought side by side in the better-received 2017 The Defenders team-up series on Netflix, Coker tells ABC Radio that fans are in for a real treat in Luke Cage season two, especially in a fight in episode 10.

“It’s just it’s really one of my favorite moments in the entire season,” admits Coker.  “You really finally get to see the Danny Rand/Luke Cage relationship that people have always wanted to see.”

Coker continues, “I think it’s going to surprise people, because the thing is, is that people had very mixed feelings — some very positive some negative — about Iron Fist, and so there were questions as to in showing these characters together, even despite the positive pairing of both of them in Defenders. But I guess it’s my arrogance of saying like, ‘Yo, well it doesn’t really matter because how we’re going to flip Iron Fist is going to be dope on our show.’ And he was.”