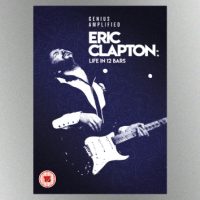 Life in 12 Bars, which got its U.S. television premiere in February on Showtime, offers an intimate profile of the British guitar legend’s life, including his traumatic childhood, his rise to rock stardom and his struggles with drug and alcohol abuse.

The movie features extensive interviews with Clapton, as well as with some of his family members, friends, musical heroes, collaborators and admirers. The doc also features rare home movies and clips of vintage live and TV performances.

The Life in 12 Bars soundtrack features 32 songs spanning most of Clapton’s career and including recordings of Eric with The Yardbirds, John Mayall & the Bluesbreakers, Cream, Blind Faith, Delaney & Bonnie & Friends, Derek and the Dominos, and solo.

In addition, the compilation boasts songs by a couple of Clapton’s blues influences — Muddy Waters and Big Bill Broonzy — as well as The Beatles‘ “While My Guitar Gently Weeps” and Aretha Franklin‘s “Good to Me as I Am to You,” which both feature Eric on guitar.

Five previously unreleased recordings appear on the album, including a full-length studio version of Clapton’s hit cover of Bob Marley‘s “I Shot the Sheriff.”

A four-LP vinyl version of the record will follow on July 20.

Here’s the track list for the soundtrack’s two-CD version: