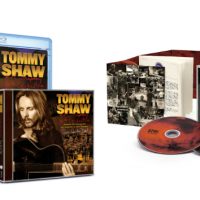 Eagle Rock Entertainment; Alpha Dog 2T/UMeStyx fans will soon have much to celebrate soon: Two new releases related to the band will be arriving this summer.

First up will be Sing for the Day!, a new concert album and video documenting a 2016 solo show that Styx singer/guitarist Tommy Shaw played with Cleveland’s Contemporary Youth Orchestra at the city’s Waetjen Auditorium. The release will be available June 29 on DVD, Blu-ray, CD and in digital formats.

Shaw’s concert set included some of his best-known Styx compositions, as well as selections from his solo career and his ’90s supergroup, Damn Yankees. The aforementioned orchestra, which is made up of high-school-age students, previously performed with Styx in 2006.

The Blu-ray version of Sing for the Day! also features bonus content, including high-res audio of four songs Shaw and the orchestra recorded that weren’t included in the concert video, plus a photo slideshow and behind-the-scenes and rehearsal footage.

The second release is a deluxe CD/Blu-ray edition of Styx’s 2017 concept album, The Mission, that will hit stores on July 27. The CD features the original album, while the Blu-ray boasts a 5.1 Surround Sound version of the record accompanied by visuals for each song based on the album’s artwork. The latter disc also includes a making-of documentary, four music videos and three high-res audio-playback modes.

Meanwhile, AXS TV will present a day-long Styx programming block Saturday, June 30. It’ll include screenings of an episode of Dan Rather‘s The Big Interview with Shaw, James “JY” Young and Lawrence Gowan; the Styx: Live at the Orleans Arena Las Vegas and Sing for the Day! concert videos; and more.

Blu-ray bonus songs:
“Down That Highway”
“The Great Divide”
“I’ll Be Coming Home”
“The Night Goes On”