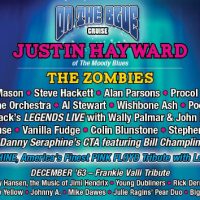 Courtesy of On the BlueThe recently announced On the Blue Cruise, a new seagoing music festival headlined by The Moody Blues‘ Justin Hayward that’s scheduled for February 2019, has unveiled its final lineup.

Among the main new additions to the bill is former Ambrosia singer David Pack‘s “Legends Live Show,” which also features Romantics frontman Wally Palmar and ex-Kansas vocalist John Elefante. All of the singers will perform some of the hits of their respective groups.

The inaugural On the Blue Cruise will set sail from Miami on February 10 and will stop at Nassau in the Bahamas and the private isle of Labadee near Haiti before returning to port February 15.

During the extravaganza, Hayward will be treating fans to two separate, unique performances showcasing a mix of Moody Blues songs and tunes from his solo catalog.

Besides the various concerts, the cruise will offer such other attractions and activities as a bungee trampoline called Sky Pad, pools, a surf simulator, water slides, Jacuzzis, a casino, a fitness center, a nightclub and much more.

Visit OntheBlueCruise.com for all the details.