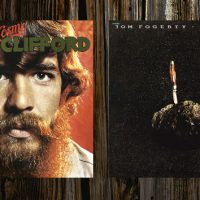 The discs, Clifford’s solo debut, Doug “Cosmo” Clifford, and Fogerty’s Excalibur, will be available on 180-gram vinyl and also will be released for the first time as high-res audio downloads and streams.

Doug “Cosmo” Clifford was the CCR drummer’s first and only solo album. The 11-track collection features eight original tunes, plus covers of The Lovin’ Spoonful‘s “Daydream,” The Sir Douglas Quintet‘s “She’s About a Mover” and The Spencer Davis Group‘s “I’m a Man.”

“Making this record was a blast, because it was a superstar line-up,” recalls Clifford. “I told everyone that I was open to any ideas they might have. That got everybody involved in the process. The camaraderie was great, there was no pressure and that got the best performances from everyone.”

A limited number of vinyl bundles including Excalibur and a signed copy of Doug “Cosmo” Clifford can be pre-ordered at CraftRecordings.com.