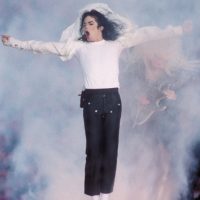 The special, which will profile the King of Pop’s life, legacy and complicated childhood, will offer never-before-seen video from interviews he did with ABC News’ Barbara Walters and Diane Sawyer.

It will also feature individuals who were around the icon before his passing, including Derek “Cooley” Jaxson, who taught Jackson how to moonwalk; Navi, a renowned Jackson impersonator; and Lisa Staub, the tour operator who was in front of his house on the day Jackson died.

But according to Smith, this special isn’t about rehashing MJ’s scandals or what led to his death — it’s about sharing his life.

“This is our opportunity to really tell his story,” Smith tells ABC Radio. “The positives, the negatives, the sensational stuff, and the true stuff that seemed out of character and really give you a full picture of who he was.”

Although Smith says the documentary will definitely feature “music and the footage” that reflects Jackson’s life, he explains its real purpose is to honestly and respectfully humanize an “extraordinary” man.

“We’ll show you some things you haven’t seen before, but also a well-rounded view of who he was,” he says.